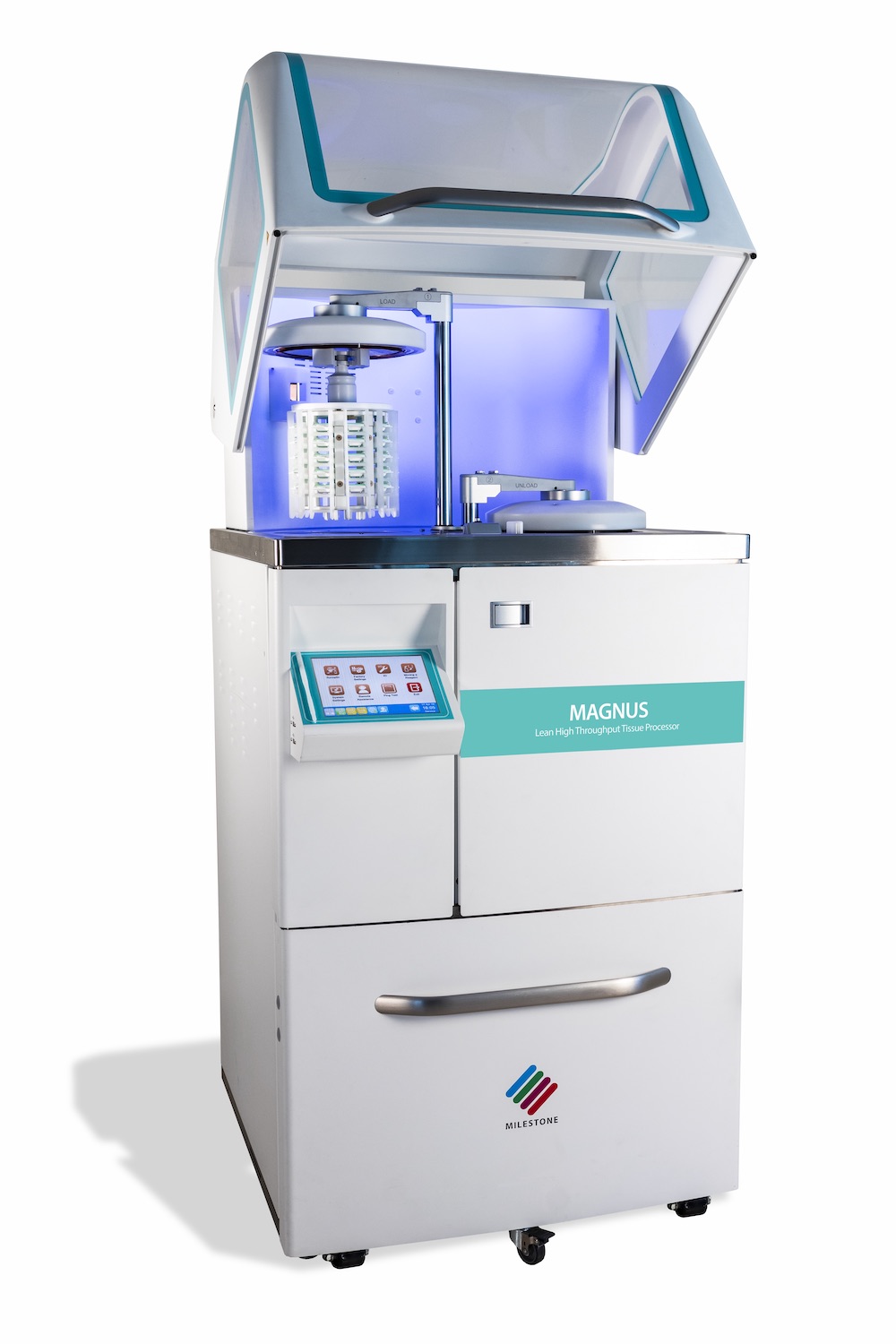 Milestone has developed Synergy, a revolutionary patented rack system which automatically embeds tissues as part of processing protocols. It is the perfect partner to Milestone’s rapid tissue processors: MAGNUS, Pathos DELTA and LOGOS.

Auto-embedding addresses chronic staffing shortages by allowing users to bypass the time consuming task of manually embedding small biopsies. With Milestone’s auto-embedding racks, there is no need to purchase a standalone auto-embedding instrument and manually transfer cassettes, nor to take up precious real estate with additional bulky instrumentation.

This system reduces the potential for errors during manual procedures, eliminating the need for time-consuming re-embedding. All of this accomplishes streamlined workflows that benefit everyone, from the Pathologist to the patient.

The Synergy auto-embedding system consist of a specially designed rack and unique consumables that allow the user to process up to 45 specimens per continuous rapid processing protocol. The consumables consist of a disposable base mold and a special orientation pad, no special cassettes are required.

During the grossing phase the specimen is placed into the Synergy mold and the orientation pad is placed on top of the tissue. Once the pad is in place and standard tissue cassette is clicked onto the mold. The assembled mold and cassette are then placed into the Synergy rack and loaded onto the continuous rapid tissue processor. Once the processing is completed the paraffin filled mold is removed from the Synergy rack, placed on a cold plate and allowed to solidify. Once the paraffin is solidified the base mold is removed and the block is ready to be transferred to the microtome for sectioning.

Synergy auto-embedding reduces common embedding errors such as orientation errors and loss of tissue samples. Historically embedding was performed manually. The pathologist or pathologist assistant describes the tissue, performs gross dissection and at times inks the tissue for orientation. The person performing the grossing must take care not to submit tissue too large and for smaller tissues often uses micromesh cassettes, tissue bags, biopsy sponges or wraps the tissue before place the specimen into the cassette. Using these techniques might increase reagent carryover during the continuous rapid tissue processing which reduces reagent usage life and increases reagent replacement frequency, thus driving an increase is processing cost.

Once the processing is complete the responsibility of proper orientation falls on the technician performing the manual embedding. Manual embedding introduces multiple risk factors such as loss of tissue samples, orientation errors and cross contamination. The embedding technician must open each cassette taking care not to lose the specimen, properly orientate the specimen into the embedding mold, fill with paraffin and allow the block to cool. Improper orientation causes addition rework due to re-embedding and could lead to loss of tissue samples at microtomy that jeopardizes diagnosis.

Tissues that come off the tissue processor are still in the cassettes and must be manually put into the blocks by a technician who must pick the tissues out of the cassette and pour molten paraffin over them. This “embedding” process is very important, because the tissues must be aligned, or oriented, properly in the block of paraffin.

During embedding it is important to orient the tissue in a way that will provide the best   information to the pathologist. At the time of grossing, mark with India ink may be put on the side of the tissue opposite that to be cut. The embedding should be done according to the type of tissue. The requisition form should always be read during embedding for proper orientation.

Grossing sample’s orientation in the cassette and during embedding follow up are the underestimated parts of grossing in surgical pathology. Although vast many of biopsy specimens do not require any orientation, actually it is impossible in some occasions, the orientation approach ought to be obligatory in grossing. In this regard, orientation of a tiny gastrointestinal or urinary bladder biopsy might sound unrealistic and unnecessary, but it is not right.

Every biopsy has an area of the most diagnostic value and the area of the specimen’s removal that can be seen by different color (in formalin fixed biopsy, it is a dot of formation of acid formalin hematin that makes blood tan brown). In the ideal world, the specimen ought to be oriented in the way that this area is laterally, not seen on the top and not concealed in the bottom). In this situation, all diagnostically valuable layers would be on the slide for the pathologist’s evaluation. If in a urinary bladder or gastric biopsy this might be seen as insignificant or in an esophageal biopsy impossible, such orientation of a duodenal biopsy would be very much desirable. In the case of a cervical biopsy it is definitely obligatory, otherwise the most diagnostically significant epithelial part, especially the area of transitional epithelium could be cut of or in the depth of the specimen below the microtome blade’s reach. Prostate needle biopsies ideally also need an orientation, but it can be done only before fixation that is not achievable in USA practice when the specimen is received in prefilled formalin containers.  But if the core were inked by the clinician immediately after obtaining the biopsy, this core can be processed with orientation. This procedure can have a significant diagnostic value. This is an example of biopsy orientation importance.

There are two main parts of the specimen orientation: before sampling in preparation to the specimen’s approach before the first cut and the sample’s orientation in the processing cassette. The first part reflects purely the specimen’s assessment from diagnostic point of view to bring the most diagnostically valuable areas to the pathologist’s attention. The second part includes technical consideration of embedding and microtomy.

From the technical point of view, effective specimen orientation requires immobilization of the area of interest before sampling. The “third hand principle”, the specimen immobilization against a vertical surface, allows the grossing person to approach the area of interest for a decisive, more or less uniform perpendicular cut.  In a case of biopsy or diagnostically significant area (surgical margin, lesion), the suggested “adjustable immobilization” concept can play a role when the uniformity of the section is sacrificed for the sake of diagnostic value of the sample.

Ink and knife/blade do their part in presenting the most informative diagnostic sample. There are different techniques that can be used for proper orientation. While some techniques have fallen out of use and others remain in practice, techniques which have been forgotten are being brought back periodically, but with corrections.

There are many ways of specimen orientation in the processing cassette. Most of them are now abandoned as cumbersome and inefficient. (2)

In pathology, tissue loss is when a section at microscopy appears to represent less tissue then one could reasonably expect from the gross. It is relatively common in small biopsies.

Every lab has experienced staffing problem from people on vacation, unexpected sick leave or losing staff from attrition. Staffing problems can cause delay in getting the microscope slides to the pathologist in a timely manner. Using the Synergy auto-embedding system combined with continuous rapid tissue processing helps overcome these unexpected hurdles by elimination the manual embedding step.

Laboratories that have adapted auto-embedding find that the Lab Managers can schedule continuous rapid processing and auto-embedding throughout the day which increases staff satisfaction by eliminating the need for early shifts. Typically, laboratories batch process overnight requiring staff to arrive at work in the early morning hours to complete the manual embedding in a timely manner. Scheduling work throughout the day is more efficient and eliminates the morning embedding bottleneck allowing staff members to work normal business hours.

There are concerns around staffing levels, with one respondent advising that in a department which should have 8.5 consultant histopathologists, there are just 4.5, meaning that either staff are being overworked, or there are delays for patients waiting for a diagnosis, and in most cases there is a combination of the two. A product of an environment such as this, means mistakes are more prone to happen, and in such a crucial area, this could have a devastating impact on a patient’s life, resulting in the need to make a cancer misdiagnosis claim.

One of the ways departments are dealing with the shortage of staff is by employing locums, but this increases the financial burden on those departments.
An alternative that is happening in 45% of the departments who answered the survey, is the outsourcing of the work, which as well as increasing the cost to the department, can also contribute to delays in diagnosis.

With the public being urged to watch out for early signs of cancer, with tv and media campaigns being used to highlight the issues, the workload for histopathologists is steadily increasing. As early detection would provide a higher chance of survival for the patient, so to the cost of treating that patient would be reduced as earlier detection would in most cases lead to less invasive and costly procedures.

The problems around staffing levels aren’t set to get any better with a retirement crisis looming as a quarter of all histopathologists are over 55. At the other end of the scale, there has been a reduction in the number of academic pathologists meaning medical students may only be touching on the subject and so don’t feel they have a connection that pulls them to want to study the subject in more depth.

Another concerning feature identified by a case study in the report, states that development and innovation are lacking. This is in part due to the understaffed departments having to sometimes cover the work of 2 people. A lack of innovation means the specialty is moving forward at a slower rate than those that are easier to recruit for. (1)

The information from 221 US histology laboratories (histolabs) and 104 from 24 other countries with workloads from 600 to 116 000 cases per year was used to calculate productivity standards for 23 technical and 27 nontechnical tasks and for 4 types of work flow indicators. The sample includes 254 human, 40 forensic, and 31 veterinary pathology services. Statistical analyses demonstrate that most productivity standards are not different between services or worldwide. The total workload for the US human pathology histolabs averaged 26 061 cases per year, with 54% between 10 000 and less than 30 000. The total workload for 70% of the histolabs from other countries was less than 20 000, with an average of 15 226 cases per year. The fundamental manual technical tasks in the histolab and their productivity standards are as follows: grossing (14 cases per hour), cassetting (54 cassettes per hour), embedding (50 blocks per hour), and cutting (24 blocks per hour). All the other tasks, each with their own productivity standards, can be completed by auxiliary staff or using automatic instruments. Depending on the level of automation of the histolab, all the tasks derived from a workload of 25 cases will require 15.8 to 17.7 hours of work completed by 2.4 to 2.7 employees with 18% of their working time not directly dedicated to the production of diagnostic slides. This article explains how to extrapolate this productivity calculation for any workload and different levels of automation. The overall performance standard for all the tasks, including 8 hours for automated tissue processing, is 3.2 to 3.5 blocks per hour; and its best indicator is the value of the gross work flow productivity that is essentially dependent on how the work is organized. This article also includes productivity standards for forensic and veterinary histolabs, but the staffing benchmarks for histolabs will be the subject of a separate article.

Keep informed about our innovative products and services

Please enter your current cost for reagents, embedder and an average volume of processed cassettes per day, so that our Team can provide you with a tailored and realistic saving prospectus

Ask for a Virtual Demo